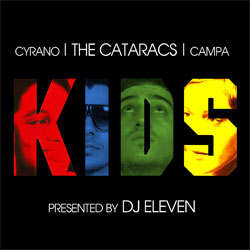 As urban, electronic, rock and international music stream together into the same bubbling pool, music critics and industry hacks have struggled to classify things into increasingly weird categories: emo-rap, trap-hop, neo-electro-hyphy-clash. The kids making the music? Shit, they’re too busy pushing things forward to worry about those labels.

That’s the dynamic spirit of The Cataracs, a Berkeley-based duo who fuses musical genres into something uniquely of their own design. Their new mixtape project KIDS, presented by New York’s DJ Eleven, is a montage of their own electric fusion of sound, spotlighting the singles “Baby Baby (The Lover’s Anthem)” and “Murder She Wrote.”

The Cataracs are David Singer-Vine, 20, who performs as “Campa,” and Niles Hollowell-Dhar, 19, known as “Cyrano.” Fellow students at Berkeley High School, the pair originally became acquainted not as friends, but as sophomore rivals: after a CD featuring Campa’s rapping circulated their school, Cyrano penned a good-natured diss record in response. It was hardly a case of Tupac versus Biggie – the two quickly squashed the beef and eventually teamed up in 2003 to become The Cataracs (they say the name represents “seeing things differently”).

With both members sharing vocalist duties and Cyrano as the group’s sole producer, the pair demonstrated a knack for hybridizing bare-knuckled urban music with the dance-friendly sounds of electronic music and memorable melodies of pop. Unshackled by previous generations’ stigmas and biases towards the meshing of musical genres, the teenagers were free to trust their own instincts. Let’s call it the audacity of dope.

Citing influences as varied as Mac Dre, The Notorious B.I.G., The Beatles and Bruce Springsteen, The Cataracs pride themselves on being hard to pin down. Case in point: the warbling auto-tuned vocals and emotive synths of “Baby Baby (The Lover’s Anthem)” seem drawn from the genetic material of 80’s glam acts like A Flock of Seagulls, while the stuttering, distorted drums and raunchy lyrics of “Popsicle” could be the offspring of Simian Mobile Disco and Uncle Luke. Still, these divergent sounds are effectively cohesive when brought together by The Cataracs’ energy, sense of humor and undeniably entertaining chemistry.

In July of 2006, The Cataracs released Technohop Vol. 1 independently. And in the tradition of so many other Bay Area luminaries, they peddled copies directly from the car trunk – 2,000 units in three months. A month later, the single “Blueberry Afghani”—a hypnotic 808-backed treat featuring The Pack of “Vans” fame—was highlighted as 106 KMEL’s “Download of the Week” and soon made it to the station’s airwaves. The track went to earn critical acclaim from “The Fader,” “XLR8R,” and UK’s “Hip-Hop Connection” and landed a slot on the In School Suspension compilation.

In April of 2007, The Cataracs re-upped with Technohop Vol. 2. This album earned a spot on the ABC News website as their “Pick of the Day” and four out of five “slaps” from influential local authority “The Slap Report.” The lead single, “Casanova,” recorded over 350 spins on stations in the Bay Area and Pacific Northwest.

The Cataracs’ most polished effort to date was last January’s The 13th Grade. The project referenced the transition between high school and college, but it also marked a crossroads where the group’s sound (if not its exuberant lyrical content) reached artistic maturity.

The latest triumph for The Cataracs is KIDS,a mixtape orchestrated by DJ Eleven, a New York City trendsetter who plans to join the group on an upcoming multi-city tour. Thus far, The Cataracs have performed at events such as “Paid in Full 3: The Hella Fresh Fest” alongside notables including Clyde Carson, Traxamillion, and Zion-I. 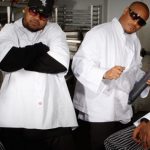 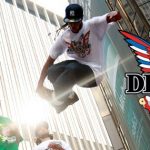